Monarchs are in decline across their range in North America. Loss of milkweed host plants due to extensive herbicide use has been identified as a major contributing factor, and loss or degradation of nectar-rich habitat from other causes, natural disease and predation, climate change, and widespread insecticide use are probably also contributing to declines.

One of the most significant actions you can take to support monarch populations is providing nectar-rich flowers and milkweed host plants. Adult monarchs depend on diverse nectar sources for food during all stages of the year, from spring and summer breeding to fall migration and overwintering. Caterpillars, on the other hand, are completely dependent on their milkweed host plants. Inadequate milkweed or nectar plant food sources at any point may impact the number of monarchs that successfully arrive at overwintering sites in the fall.

While many guidelines are available to help you select the best milkweed for your region, these guides were created to address a need for evidence-based, monarch-specific nectar plants throughout the U.S. The monarch nectar plant guides are primarily geared toward gardeners and landscape designers, but they will also be useful for land managers who are implementing large-scale monarch restoration projects.

Please refer to Monarch Butterfly Nectar Plant Lists for Conservation Plantings. This format is designed to provide the most relevant information for selecting monarch-beneficial plants for use in ecological restoration and conservation plantings. This document includes guidance and regional plant lists for all areas of the Continental U.S.

A Note about Species Selection

Not all species will work for a given site; we encourage you to use additional references when making final species determinations for your location.

The plant species included in these nectar plant guides have been chosen based on monarch nectaring observations compiled from numerous sources, including published and technical reports, research datasets, and personal communications with monarch researchers, botanists, and other experts. Nearly 24,000 observations on 358 native plant species were collated into a matrix that was then broken down into our 15 pre-determined regions based on species distributions. These regional lists were then further broken down into species that were commercially available, had broad coverage over the entire region, and were known to be hardy or relatively easy to grow in a garden setting. Wherever possible, we included commercially available species that were reported by multiple sources or were noted to be exceptional monarch magnets. Each list is tailored to only include species that bloom during the times of year that monarchs are expected to be in each region.

You Can Help! Submit Your Observations

These plant lists are available in two formats with information tailored to each audience. These nectar plant lists were compiled based on best available data and are considered working documents. You can help us improve them by submitting additional monarch nectaring observations via our online survey.

These guides were developed in partnership with Monarch Joint Venture and the National Wildlife Federation.

Newly published research found worrying levels of pesticides in milkweed plants growing in California’s Central Valley. More than 200 milkweed samples were gathered and a total of 64 different pesticides were found, with an average of nine per sample and as many as 25.
March 13, 2020

Number of Monarchs Overwintering in Mexico Falls by 50 Percent

The World Wildlife Fund-Mexico and the Comisión Nacional de Áreas Naturales Protegidas announced today that monarchs in central Mexico occupied an estimated 2.83 hectares of forest during the winter of 2019–2020, a reduction of approximately 53 percent from last winter.
January 22, 2020

The Xerces Society today announced that the number of monarch butterflies overwintering in California remains at critical levels for the second year. We must take action now to save the western monarch migration. 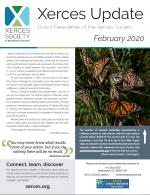