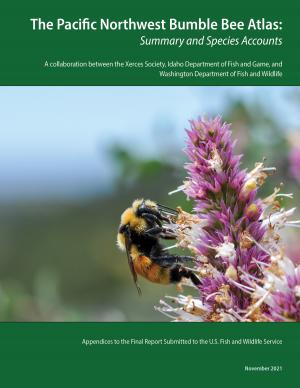 Bumble bees are important pollinators throughout much of the world, essential to the health of wildlands and natural areas. Yet, bumble bee population declines have been documented from multiple continents. In North America, many species have been considered for listing as endangered under the Endangered Species Act of 1973, including several bumble bees in the western United States.

Despite their importance, an incomplete picture of the habitat needs and status of bumble bees remains a barrier to effective conservation. To address this need, we launched the Pacific Northwest Bumble Bee Atlas (PNWBBA) in 2018 across Oregon, Washington, and Idaho. Our goal was to establish a framework to direct survey effort throughout the region, and then recruit volunteers to conduct surveys. Using this large group of trained volunteers, we would quickly be able to produce a regional snapshot of bumble bee distribution, health, and habitat needs. We developed a sampling design based on multiple biological and logistical criteria, and ultimately selected a network of grid cells to be the structure and focus of our survey effort. Provided in this document, are the results from the first three years of the project.