Decades ago, as a much younger person, I came to know osuzume-bachi, the “big sparrow wasp” (properly identified by its scientific name as Vespa mandarinia), on a sort of neighborly basis.

During my college years at a university in rural southern Japan, the giant hornet—recently described everywhere in the media as the “murder hornet”—was a semi-regular sight. It was common to encounter it on weekend hikes in the nearby mountains, where one would buzz gently through the trees right past me in search of food, or returning to a distant nest. Once I found one directly on a walking path where it was busy disassembling a large butterfly that it caught, close enough that I almost stepped on it.

Since then, the giant hornet has apparently landed on North American shores, first with a colony found (and destroyed) in British Columbia in 2019, then with a lone dead specimen found in Washington state a few months later near the British Columbia border. Now, as of this writing, two additional hornets have been found in May 2020, one in British Columbia, and a second one again near the Canadian border in northwestern Washington state. The circumstances behind the giant hornet’s arrival are unclear, but given the proximity of the recent discoveries to major shipping ports, it’s considered possible that they arrived hidden in cargo from Asia.

The giant hornet (Vespa mandarinia) is a large and impressive insect. Almost as long and as round as a person's thumb, it has bold orange and black stripes on it's body and an orange face. (Photo: Alpsdake, Wikimedia Commons [CC BY-SA 3.0].)

Despite the intense media hype, the long-term survival potential of Vespa mandarinia in the Pacific Northwest remains unclear. Based on the insect’s ecology, establishment in the region, although possible, seems uncertain—especially given its dietary requirements. And to be clear, the giant hornet is hardly a murderer.

Like other social vespid wasps, such as yellowjackets, the giant hornet forms new colonies in the spring, which are established by solitary queens that have hibernated over the winter. These colonies are usually located underground in forested areas. The size of the round, underground paper nests reach several feet in diameter, and may contain hundreds of hornets in mid-summer. (Note: The nest located in British Columbia during 2019 was much smaller than this, suggesting that while the hornets were able to successfully nest, they probably were not thriving.)

Near the end of a typical nesting season, a colony will work to raise males and new queens, which may mate during a period of time when the new queens leave the natal nest in search of an underground nesting site. At this point, the original nest occupants, including the original founding queen die. If they have mated successfully, the new queens will continue the cycle into the next season. While some media accounts claim that the hornet can’t adapt to cold climates, it is in fact quite adaptable, and is native to a large range from Eastern Russia to parts of India. 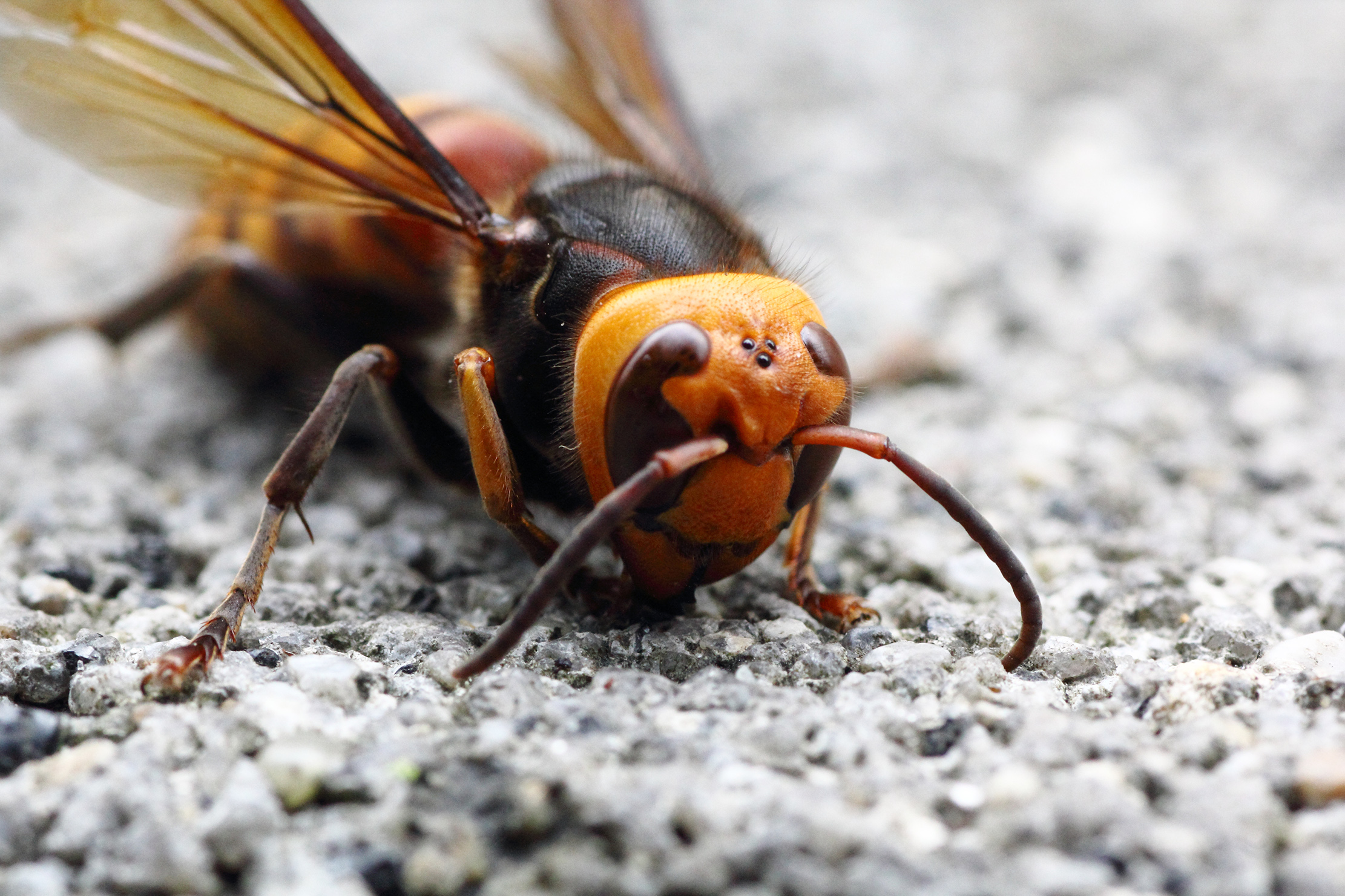 The bright orange face and general lack of hairs, combined with its large size, makes the giant hornet easy to identify. (Photo: t-mizo, Flickr [CC BY 2.0].)

The most notable characteristic of giant hornets is of course their size, which averages about the size and diameter of a typical human thumb, making it one of the world’s largest wasps by body size, wingspan, and weight. Combined with bright “tiger-stripe” coloration, the hornet takes on an impressive and formidable appearance. Such a notable size comes with a powerful sting, yet despite assertions that giant hornets in Asia kill dozens of people every year, they are not aggressive animals, focusing their stings on prey insects, and on animals (including people) who harass their nests. Additionally, the reports of human deaths are actually statically similar to those already reported in the U.S. by other stinging insects, such as honey bees.

While it’s always important to remain vigilant about the appearance of new species in an area where they are not native, the giant hornet is probably poorly adapted to the Northwest. Although some geological similarities exist between east Asia and the Pacific Northwest, plant communities and types of insects are actually quite different.

First among these, unlike the forests of western North America which are overwhelmingly dominated by conifers, forests in Japan, Korea, and eastern China where the hornet is most at home, have a much higher abundance of hardwood trees. These trees, or more precisely the sap they produce, is the most important springtime food source for carbohydrate-hungry hornets emerging from winter hibernation. While they can and do feed on flower nectar, free-flowing sugary tree sap provides a much more available food source, essential fuel for the energy needs of such a large, active, and powerful insect.

A giant hornet collects sap flowing from the bark of a tree. Sugar-rich sap is a major part of the hornet's diet during spring. (Photo: yukin_74, Flickr [CC BY-NC 2.0].)

Second, to provide equally large and abundant food for their large and numerous larvae, giant hornets require big sources of protein. Throughout its native range this typically consists of larger butterfly species, and very frequently, large praying mantises, which are abundant in the hornet’s native habitat. The Pacific Northwest offers few insects of this size and abundance, which means that while hornets could potentially establish in the region, they will be extremely hard pressed to find the kinds of food sources that typically sustain them.

Of course, another factor in the fame of giant hornets is their well-documented attacks on honey bee colonies, in which small groups of hornets will coordinate an attack on a much more populous honey bee hive, killing the adult bees with bites from their powerful jaws, then occupying the hive for several days during which they remove the bee larvae as a food source for their own offspring. Such group hunting is most common in late summer when the hornets are attempting to raise the next generation of queens, and their colony’s already high protein demand is even greater. These kinds of attacks also target other social wasps as much, or potentially more, than they target honey bees. Interestingly, bumble bees might largely escape this kind of threat since they are mostly finished with their own colony life cycle by late summer, making them a sparse and unrewarding target for marauding hornets.

Alarmist news of giant hornets arriving at a time when people are already anxious and worried about plenty of other things doesn’t feel particularly helpful. It is important to be vigilant, but names like “murder hornet” feed into a more general fear of insects, which in Washington state has resulted in people killing queen bumble bees, mistaking them for hornets.

People have been confusing bumble bees with giant hornets, killing them and reporting them to the Washington Department of Agriculture. (Black-tailed bumble bee [Bombus melanopygus], photographed by Rich Hatfield.)

Nobody needs a new invasive species, and the giant hornet is a good cautionary reminder that species move around the globe continuously with unknown potential impacts on new ecosystems where they become established. In the case of the giant hornet, however, it would be relatively unprecedented for such a creature to thrive in a new land with few of the food sources that it most obviously depends upon. Time will tell what happens, and fingers remain crossed that it won’t appear further in North America, but among all the current events to be concerned about, a rarely seen hornet shouldn’t be one of them.

Some things to remember about the giant hornet

Invasive hornets on the Washington Department of Agriculture website

pollinators
how you can help
update
weird and wonderful