The western monarch breeding season is coming to a close for 2020 and we are in the midst of the fall migration—the time when monarch butterflies are making the long journey back to their overwintering grounds. Last fall, for the second year in a row, the western monarch butterfly population hovered at just under 30,000 butterflies overwintering along the California coast. The small number of monarchs reported over the past two overwintering seasons are not only the lowest ever recorded, but are also below the proposed quasi-extinction threshold (the point at which the migration may collapse) that researchers have posited for the western migratory population of monarch butterflies. With such a low overwintering population, monarch researchers, biologists, and enthusiasts were all very concerned about how the 2020 monarch breeding season would unfold. Would we even see monarchs breeding across much of the West? Fortunately, the answer ended up being yes, even if the numbers are much lower than we would like to see. At least monarchs are holding on in the West! 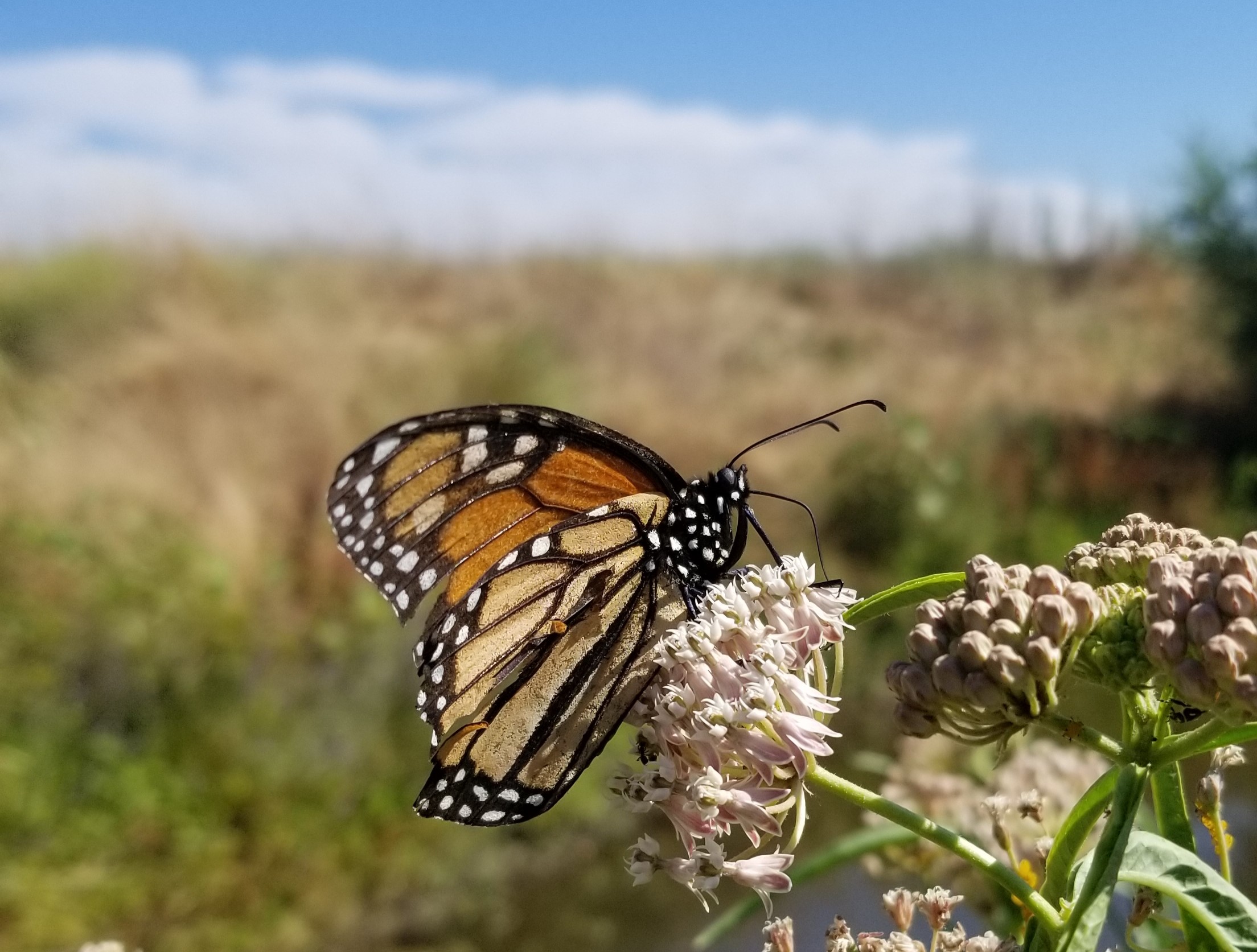 After leaving the overwintering site where it had spent the winter, a tattered monarch arrives at breeding grounds in the Central Valley of California in spring 2019 (Photo: Xerces Society / Stephanie McKnight.)

To get a picture of the western monarch breeding population this year, we can look at monarch butterflies reported to the Western Monarch Mystery Challenge campaign, Western Monarch Milkweed Mapper, Journey North, and iNaturalist as well as the results from the fourth annual International Monarch Monitoring Blitz. From what we can gather from these sources, it looks like the size of the 2020 breeding population is similar to last year overall, with local variation. Some areas like Utah, had an uptick in monarch observations, with dozens of adult and breeding reports in the northern part of the state. This was encouraging to see because very few monarchs have been reported in Utah the past two years. Other areas, including Idaho, Nevada, and Oregon, unfortunately appear to have a smaller breeding population with far fewer observations compared to last year; only two adult monarchs were reported in Washington, even worse than last year when there were nine. There were a few reports in Montana, a state with very little data on monarchs. Also, in areas east of the Continental Divide in Colorado and New Mexico, there were dozens of monarch adults and monarch breeding reported, although we often think of monarchs breeding east of the Continental Divide as part of the eastern monarch butterfly population that generally overwinters in Mexico.

In California, monarchs were reported in similar numbers in the inland part of the state compared to last year. Along the coast, there were reports of higher numbers from the San Francisco Bay area down to the Los Angeles and San Diego area in both the spring and summer. However, some of this uptick may be due to an increase in efforts to gather records this year. The Western Monarch Mystery Challenge was a special community science campaign that ran from February 14th through April 22nd 2020 to gather spring monarch observations in California (except for the overwintering grounds and coastal areas). A total of 596 monarchs were reported to the challenge, but only around 300 of those were wild monarchs within the challenge region. Many of the reports to the challenge were captive reared monarchs along the California coast. In a similar trend, many of the monarchs in California reported to both Journey North and the fourth annual International Monarch Monitoring Blitz this year were captive reared monarchs on the California coast (see clusters of reports on the map). It is unclear if we are seeing an increase in the number of monarchs being captive reared on the California Coast, or if there are more people reporting their captive reared butterflies. Xerces, Monarch Joint Venture, and many other monarch conservationists do not recommend rearing monarch butterflies as a conservation strategy. You can read more about this topic in this Xerces’ blog post and this handout from Monarch Joint Venture. Captive reared monarchs are not benefiting the population. They have a higher disease rate, reduced migratory success, reduced genetic fitness, and greatly disrupt our understanding of natural monarch distribution. These factors hinder conservation efforts and should be reason enough to not rear monarchs.

While reports of monarchs in the West appear to be similar or worse than last year (depending on the region), it is important to keep in mind that this is not a robust monitoring of monarch breeding across the West. However, if we look at reports from Art Shapiro, a professor at the University of California at Davis who has been monitoring the same transects for butterflies in California for over 40 years, this year was better than last year for monarchs, with more adults reported, which is somewhat encouraging—but no breeding. Overall, it still doesn’t look good for the western monarch population: more monarchs were reported across the western breeding range than expected, but it looks as though breeding was less than or similar to last year. We will not know for sure how well the monarchs fared this year until we have counts from the annual Western Monarch Thanksgiving and New Year’s Counts. This year the Thanksgiving Count runs from Saturday, November 14, to Sunday, December 6, and the New Year's Count runs from Saturday, December 26, to Sunday, January 10. You can learn more about these counts and how to get involved and stay informed on the Western Monarch Count website.

As we wait for monarchs to arrive at overwintering sites, this is a good moment to learn about how each of us can help the western monarch population recover by reading the Western Monarch Call to Action. In particular, this is a great time of year to plant native milkweed and native monarch nectar plants. Also, keep your eyes open for migrating monarchs and be sure to report any that you are lucky enough to see to the Western Monarch Milkweed Mapper. We are especially keen to learn more about what plants they are using to fuel them during their arduous migration back to overwintering sites.

We are also very saddened about all of the wildfires currently burning in the West. Our thoughts are with all those affected by the catastrophic fires. It is unclear how these fires will affect the monarch butterfly population this year. Millions of acres have burned, and while many of the fires are in forested habitats where milkweed is less common (and therefore monarch breeding less common), there are many, particularly in California, that have burned known monarch breeding and overwintering sites. The extent of monarch breeding and overwintering habitat that has burned is still being assessed. It is unclear how heavy smoke and fires may affect the upcoming fall migration, but some research by David James at Washington State University, suggests that monarchs are capable of migrating in poor air quality such as wildfire smoke. We know that wildfire can kill immature monarchs (eggs, caterpillars, or chrysalises), remove monarch nectar and host plants, degrade roost sites used during migration, and destroy or degrade overwintering sites. However, keep in mind no studies to date have looked at how wildfires affect breeding monarchs in the Western US. We do know that fires are a major threat to overwintering sites, and unfortunately, we do know that six monarch overwintering sites in California have burned to some degree this year in Monterey, San Mateo, and Santa Cruz counties. You can look at this map that shows fire perimeters in California and overwintering sites to see which areas have been affected by the fires.

While some of this news about the western monarch population this year is disheartening, we are continuously encouraged by the immense collective efforts that have culminated in recent years to save this iconic migratory population of the monarch butterfly, and we hope all of you are encouraged as well to do any small part you can to help monarchs and other pollinators.

Map showing wildfire perimeters (red) and western monarch overwintering sites (orange) in central California. This map was correct when the blog was published. Click here to see an interactive map with updated fire perimeters and the ability to zoom in to view areas in detail.

Read the western monarch Call to Action to learn what you can do.

Read more about our work to protect monarchs.

Why rearing monarchs is bad: Joint Statement Regarding Captive Breeding and Releasing of Monarchs.