Have you heard of the "very hungry caterpillar" that eats aphids?

In September, I visited the town of Norman, close to where I live in Oklahoma, to give a photography workshop to a group of botanists from the University of Oklahoma. The workshop was held in Saxon Park, a small park that has running/walking trails through mixed habitat on the south edge of the town. We were concentrating on techniques to photograph plants, but as we walked along, I couldn’t help being distracted by butterflies. As we entered a wooded area, I saw what appeared to be a satyr, perhaps a gemmed or Carolina, fluttering close to the trail. When I got closer, I realized it wasn’t a satyr, but a harvester, Feniseca tarquinius. I’ve only seen a couple of these in central Oklahoma, and I’ve only gotten one decent photo of an adult (on slide film), so, I was thrilled.

As I watched, the butterfly landed on a leaf of a greenbrier. The greenbrier had a ton of aphids on it, to the point that it looked strange, like it was covered in rough bumps. I was really hoping there were harvester caterpillars in among the aphids. Unfortunately, I didn’t bring my ‘grandpa’ glasses with me, so I couldn’t see any detail. I wanted to get some close-up photos, but because we were there to photograph plants, I wasn’t set up for such high magnification photography, not to mention we were in a deeply shaded part of the woods which would require flash equipment that was back at my vehicle. We had to move on, and I had other commitments right after my program, so I left the park without photos, but with a plan of coming back the next day.

It took me a bit to find the exact spot the following day, but after a little searching I found the greenbrier. I had brought my reading glasses and immediately noticed a bunch of larvae along with the aphids as well as a few tending ants. I earnestly photographed all of the sections of the vine, including some close-ups of interesting behavior including an aggregation of ants, aphids, – and butterfly larvae.

After processing the images, I got all of the subjects identified. Natalie Hernandez, entomologist and aphid specialist for the U.S. Department of Agriculture’s Animal and Plant Health Inspection Service, identified the host aphids as woolly maple aphids (Neoprociphilus aceris). The tending ants have been identified by Dr. James Trager, of Missouri Botanical Garden’s Shaw Nature Reserve, as the false honey ant (Prenolepis imparis). And Amy Buthod of the University of Oklahoma, who was with me in Saxon Park when I spotted this colony, identified the plant as bristly greenbrier (Smilax tamnoides). As for the larvae, it could only be that of the harvester butterfly. 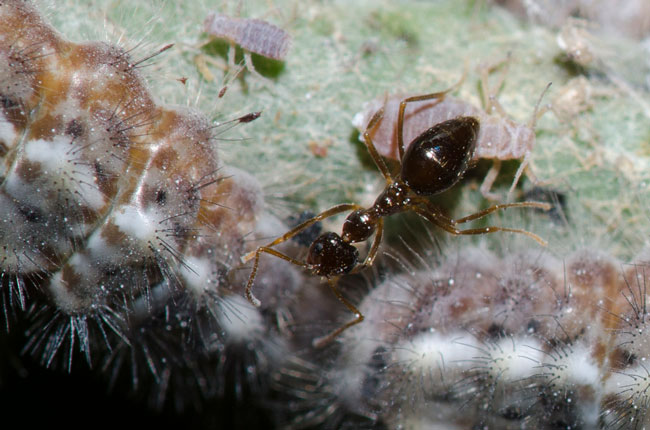 There were two adult harvesters perched on leaves of the vine on the 19th, the day of the photography workshop. When I returned on the 20th for photography, no adults were present. I went back again five days later for more photos, and the entire colony was gone. The vine was still there and looked the same, but no insects were on it at all. I searched the immediate area and a lot of the greenbrier was present, but I could not find any more aphids or harvesters. Harvester caterpillars can complete development in little more than a week, so a colony like this is a relatively fleeting phenomenon. I also looked around the original vine for any harvester pupae, with no luck.

I enjoyed my brief encounter with the harvesters, ants, and aphid colony. Now that I’ve seen this phenomenon and know what to look for, I’ll be keeping my eyes open for the next encounter with this interesting butterfly. 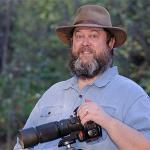 Bryan E. Reynolds is an award-winning professional photographer who specializes in nature and wildlife photography, with an emphasis on invertebrates. He has been featured in numerous publications, including those of The National Geographic Society, The Nature Conservancy, and The Smithsonian Institution. Visit his Flickr stream for more amazing images!