In a rapidly warming climate, imperiled species may have nowhere to run.

The western glacier stonefly (Zapada glacier) takes the real estate mantra “location, location, location” seriously. In fact, their life depends on it. Making their home in the aquatic alpine ecosystem in the highest elevations of Glacier National Park, Montana, the species is uniquely adapted to thrive in the very cold, low-oxygen, nutrient poor environment provided by glacial meltwater streams. This hostile environment means nymphs of the species are protected from predators and competition. But, as the glaciers rapidly disappear due to climate change, so too will the species who depend on them.

The western glacier stonefly is one of 7 species of globally rare insects within Glacier National Park. Found in small, scattered populations, the stoneflies are known to have existed in only 5 small streams in Glacier National Park, Montana. In December of 2010, the Xerces Society and the Center for Biological Diversity petitioned the U.S. Fish and Wildlife Service for listing of the species as threatened under the Endangered Species Act.The USFWS subsequently funded the U.S. Geological Survey to conduct a survey of the species.

While both males and females of the species are fully winged, stoneflies, in general, are weak fliers. These small creatures can only fly or walk for very short distances, and face the threat of predation every minute they are away from the icy streams they occupy. Because of this, stoneflies rely primarily on stream corridor connections to colonize new habitats. With glacial streams warming and disappearing altogether, the species must travel higher and farther to find the habitat they require.

In a two-year period beginning in 2011, scientists resampled six streams throughout the stonefly’s historic range and, using species identification and genetic analysis, found the western glacier stonefly in only one previously occupied stream and in two new locations at higher elevations. The stonefly was on the move.

On October 4th, 2016, the western glacier stonefly, along with the meltwater lednian stonefly (Lednia tumana), was proposed for listing as threatened under the Endangered Species Act. While it remains to be seen what the listing will mean in practical terms, we hope that this obscure stonefly with its hardscrabble life may have significant impacts on preserving one of the rarest ecosystems on earth.

Male stoneflies attract females by drumming. Mature nymphs (teenagers?) crawl out of the icy stream onto beds of rock, plant material, or pieces of wood nearby. Males use a specialized structure on their terminal abdominal segments to tap on the bed. The frequencies are transmitted through the substrate (not through the air), and females feel, rather than hear, the vibrations. Virgin females will drum in reply, followed by continued communication and migration towards each other until the two meet, and mate.

While the specific feeding behaviors have not been well observed, nymphs of this family are known to primarily feed on detritus, and studies of their mouthparts suggest they are adapted for shredding plant tissue and organic matter. Plant material generally breaks down much more slowly when submerged in water, and would persist even longer in the cold, low-oxygen environment where these stoneflies are found. It can be surmised that these stoneflies play an active role in maintaining the water quality of these glacial streams, which likely has a positive effect on all life that relies on these streams. 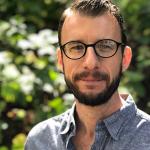 Justin was formerly the Xerces Society's Web and Communications Coordinator, managing the website, blogs, and social media. As a Penn State Extension Master Gardener, Justin provides education and outreach to his community on a range of gardening-related subjects such as sustainable and pollinator-friendly gardening practices. He lives in State College, Pennsylvania.