This article originally appeared in the spring 2021 edition of Xerces’ magazine, Wings. Click to view the full spring 2021 issue.

For generations bumble bees have captured our attention and piqued curiosity. They share our farm fields, meadows, backyards, and parks. Their fuzzy bodies, colorful patterns, and benign nature have endeared them to us and have embedded them throughout our culture—from science to music, home décor to books. Charles Darwin studied “humble-bees” in the fields around his home at Down House. Rimsky-Korsakov’s Flight of the Bumblebee is one of the most familiar orchestral pieces. Dumbledore, the paternal wizard who guided and protected Harry Potter in the books and movies, is an old name for bumble bee. The list could go on, leaving no doubt that we have an affection for and connection to bumble bees.

Bumble bees are ubiquitous across the Northern Hemisphere and in South America. Globally, there are around 250 species, with their center of diversity in the Himalayan region of Asia, where these insects originated before diversifying and dispersing to colonize other parts of the world. Generally, they are cold-weather specialists, although they are present almost anywhere that flowers are found, from deserts and river valleys to alpine and Arctic tundra. Here in North America, we have nearly fifty species, with the greatest diversity found in and around the Cascade Range in the Pacific Northwest and the Rocky Mountains.

Unfortunately, our fascination with bumble bees has not yet led to practices to protect them from other, less desirable facets of our culture—chemical-based and mechanized agriculture, sprawling cities, and lifestyles that are changing the climate. Research from around the world suggests that up to a quarter of bumble bee species are at some risk of extinction. In the United States, two species are protected under the Endangered Species Act thanks in part to the Xerces Society’s scientific research and advocacy, but many other imperiled species are in need of conservation attention.

Gaps in our knowledge limit us from taking rapid, effective conservation action for bumble bees. These gaps range from not knowing the particulars of nesting and overwintering needs, to a lack of understanding of the complex biology of certain species, to a paucity of the baseline information needed to assess population health.

Given these deficits, Xerces has adopted a multi-pronged approach to bumble bee conservation, as we do for all of our work. We use outreach and education to engage and inform new audiences. Our staff use applied research to ensure that habitats are managed in a way that minimizes impacts on these species, and we provide technical assistance to partners to guide habitat restoration on farms, in parks, on roadsides, and in gardens. We also work to ensure that these habitats are protected from pesticide use and that they provide climate resiliency. We use advocacy to get the attention of federal, state, and local conservation agencies, and submit petitions to secure protection for the most imperiled species under state and federal endangered-species laws. Concurrently, we are working with research partners around the world to help close the knowledge gaps and to ensure that our conservation efforts maximize the benefits to these species.

At the forefront of this work is the Herculean task of finding and measuring populations. Bumble bees often have large geographic ranges and establishing where individual species are present can be excruciatingly difficult. Even more difficult is determining where individual species are not present. From the beginning, we recognized that a small group of scientists could not do this work alone and that to be successful we needed to involve more people. In 2008 we began a pilot project focused on the rusty patched bumble bee (Bombus affinis), Franklin’s bumble bee (B. franklini), the western bumble bee (B. occidentalis), and the yellow-banded bumble bee (B. terricola). Community scientists were encouraged to submit their sightings—a photograph with location information—via email. We advertised this project in our talks and short courses and through “wanted” posters, and almost immediately we were inundated with observations from all over the continent.

Most of the observations we received, however, were not of the target species. Rather, they were sightings of species that bore some resemblance to them, and more often were of common species that frequent backyard gardens. Due to staff capacity, we could process—verify, georeference, and manually enter—observations of only the target species into our conservation database, leaving thousands of other sightings unused. Even so, the submitted observations of our target species dramatically improved our localized conservation and advocacy efforts, particularly for the western and rusty patched bumble bees. Unfortunately, this effort had an unintended side effect. While we were gaining valuable information about where rare species were persisting, over time we recognized that our practice of recording only rare species was having the effect of making them appear more common than they actually are. Because we lack the data necessary for comprehensive estimates of bumble bee populations, we often use relative abundance (the abundance of an individual species compared with all other species of bumble bees) as a proxy for population estimates. What we needed was a broader approach to collecting data on all bumble bee species.

To address this issue, we collaborated with Dr. Sheila Colla (then at Wildlife Preservation Canada, now at York University) and the team at eButterfly to build a community-science project to track and conserve North America’s bumble bees. The culmination of this joint effort was Bumble Bee Watch, which launched in 2014 and tracks all bumble bee species. Using an online platform, individuals can upload their photographs, compare them to an identification key, enter the locations and dates of their observations, and submit them to the database. Xerces staff and Bumble Bee Watch partners, relieved of the time-consuming task of data entry, can then check and verify the identity of the bees.

Bumble Bee Watch took off immediately, and since its inception has attracted thousands of registered users, who have submitted more than seventy-five thousand observations. These photographs and associated data have vastly expanded our understanding of bumble bees throughout North America. We have documented species well outside of their previously known ranges, helped discover populations of rare species, and gathered valuable information about the plants that bumble bees are visiting in different regions. One pattern we noticed as the data accumulated was that bumble bee distributions largely reflected human population density and transportation corridors. This was not exactly the most natural assessment of bumble bee health we were hoping to amass, but it is a common problem when data collection depends on volunteer participation: people tend to look where they live or can easily travel to. 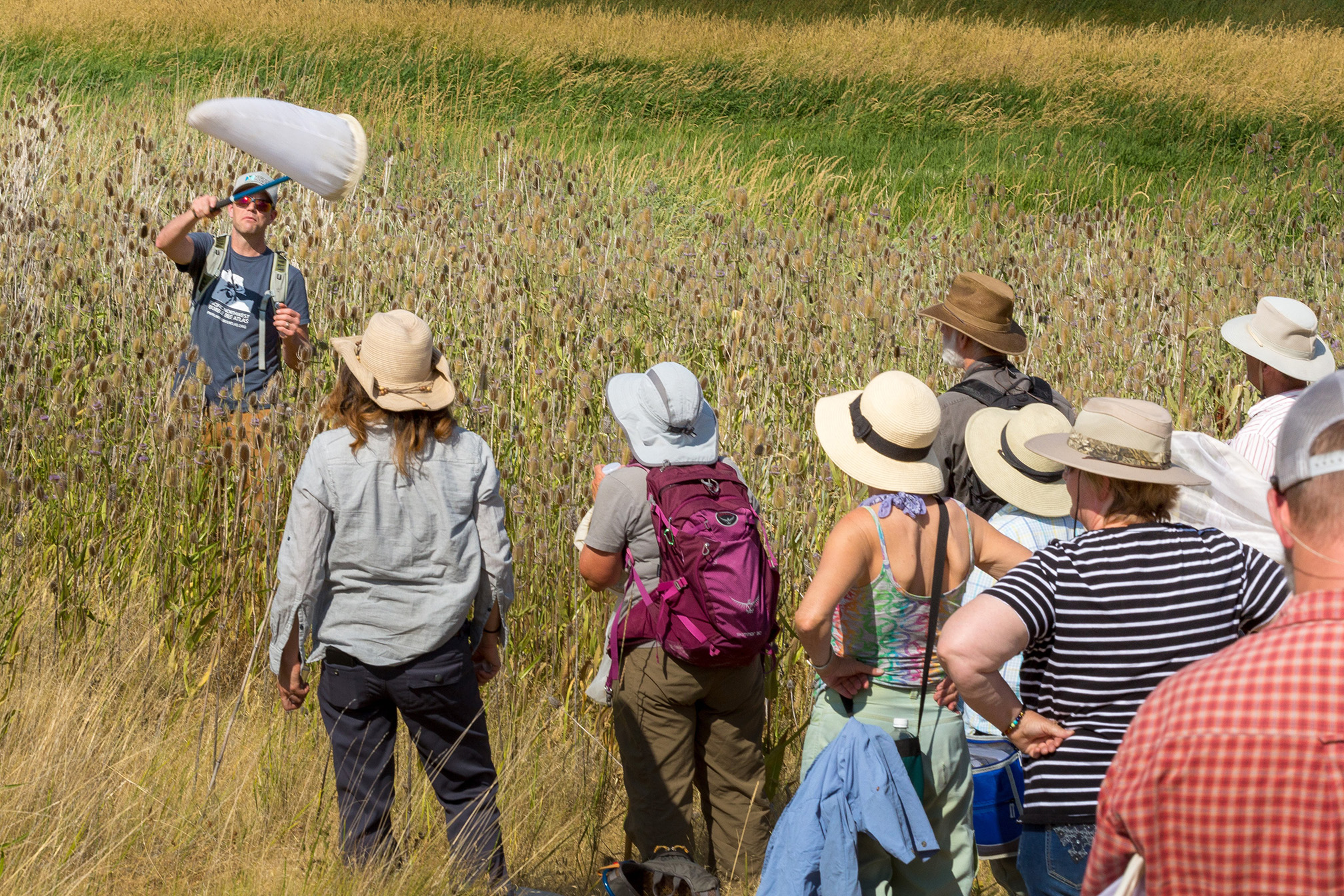 The author shows participants in the Pacific Northwest Bumble Bee Atlas how to catch bumble bees so that they can be photographed and identified. Regional atlas projects have also been launched in Nebraska and Missouri, and soon, California. (Photo: Steve Lenz.)

Seeking to improve on the situation, the Xerces Society collaborated with stakeholders in Idaho, Oregon, and Washington to launch the Pacific Northwest Bumble Bee Atlas in 2018. By dividing the region into grid cells that individuals could adopt, and by encouraging people to search beyond their backyards and venture into remote parts of the region, we could overcome this geographic bias. Community scientists heard and responded to our call to action! From 2018 to 2020, more than six hundred volunteers conducted more than fifteen hundred surveys and contributed more than twenty-two thousand bumble bee observations. Our understanding of Pacific Northwest bumble bees has increased dramatically, and we now have data at the appropriate scale to inform targeted conservation action. We are currently working to develop evidence-based recommendations for land management and conservation to benefit bumble bee populations, particularly for imperiled species.

The Pacific Northwest Bumble Bee Atlas has provided a model for further efforts. With regional partners we launched atlas projects in Nebraska in 2019 and Missouri in 2020, and this year we are expanding to California. These projects will advance our understanding of bumble bee ecology, which in turn will inform conservation management. Moreover, the information that they generate in the form of observations can serve as baseline data to which future conditions can be compared. We hope to have additional atlas projects in other states and regions in the future, expanding our capacity to direct conservation efforts where they are needed most.

Each step in this process has been accompanied by uncertainty. We live in a busy world with no shortage of options for information and activity, and at each iteration it was possible that our call to action would fall into the void. Yet every time we asked for help, people responded in ways that surpassed our expectations, devoting valuable time and energy to help tiny creatures that are easily taken for granted. We can measure the many direct benefits that have emerged—bumble bee observations, habitat surveys, acres planted—which will certainly make a difference in conservation.

Just as significantly, however, our bumble bee atlases and other community-science projects have created a growing conservation community dedicated to bumble bees. Thousands of people have viewed our training materials and attended our workshops and are now equipped with greater knowledge; many of them are hard at work in their neighborhoods and hometowns raising awareness and pursuing grassroots conservation opportunities. These efforts, regardless of their form, are making a difference in conservation and will benefit future generations.

Wanted posters were created in 2008 to recruit volunteers to search for four species of imperiled bumble bees. The success of this effort was the impetus for the creation of Bumble Bee Watch, and eventually the regional bumble bee atlas projects. (Artwork: Elaine Evans.)

Sign up to submit observations to Bumble Bee Watch